The Food and Wine Hedonist

leave your inhibitions at the door

Hair of the Dog That You Bit

I’ve been fortunate enough to have some great food experiences around the country and around the world. I’ve had crepes from a cart across from Notre Dame in Paris. I’ve eaten at Michelin-starred restaurants in New York. I’ve eaten sushi off the body of a naked Ariana Grande while on one of the Sultan of Brunei’s larger boats.

Ok, that last one hasn’t happened. Yet.

Not only have I eaten some great food, I’ve made some terrific meals through the years.  I’ve shared many of my food experiences – while dining in or out – with the hopes of bringing culinary enlightenment to you readers.   Whether it’s educating you on a new cooking technique or introducing you to a new cuisine, my posts usually strive to bring the best of the food world to your corner of the world.

This isn’t one of those posts.

A few weeks ago, we had an impromptu gathering at our house with some friends.  Our friends are foodies as well and, whenever we get together, there are always really delicious home-made dishes.   But this time we decided to have the evening catered by one of my all-time favorite restaurants. 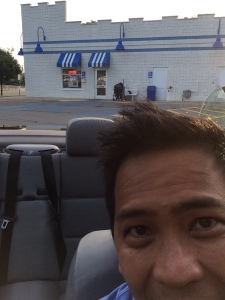 Maybe calling White Castle a “restaurant” is a stretch.

I was golfing earlier in the day and consumed a lot of beer in an effort to stay hydrated on that hot day. As my golf score steadily approached a decent bowling score ( = really bad) I started to drink even more to ease my frustrations.  And, of course, what’s a round of golf without some post-game commiserating/ celebrating in the clubhouse?   What I’m getting at is that I had what can only be described as “an enhanced state of mind.”

I wasn’t in any shape to be using sharp knives and cooking with fire, so we stopped by White Castles in preparation for the night’s festivities.

For those of you not familiar with “Crave Cases” each of those holds thirty of their delectable little burgers.  There’s also a “Crave Crate” that has 100, but that’s a story for another day.   A day when I can figure out how to legally talk about what went on that one night.

I honestly don’t remember much of what happened this time. Let’s face it, it’s a pretty bad sign of things to come when the evening STARTS with sliders. I do know there were a lot more alcohol, sing-a-longs, and bad dancing.

The next morning was a shitshow.  Even though I passed out relatively early, I still had a pretty bad hangover.   In addition to the requisite pounding head, I felt some weirdness in my gut.   I was confident that I wouldn’t have an Assquake and there wasn’t going to be a  Technicolor Yawn, either.   Just general gastrointestinal uneasiness.

They say that a good cure for a hangover is to have a little bit of “hair of the dog that bit ya.”   I’ve never had any luck with that as a curative for the aftereffects of a night’s worth of drinking. Copious amounts of water and half a bottle of ibuprofen usually does the trick for my headaches.

But what about for stomach ills? I had a pretty good feeling the sliders were the culprit behind my stomach malaise. Is it possible that a little hair of that dog might help?

It was worth a shot.

I was completely winging it and only used six eggs.  I think it could’ve used a couple more, so the recipe below calls for eight eggs.   I used the regular hamburgers, but the cheeseburgers would work, too. Even better – the jalapeno cheeseburgers.  But those damn “friends”  of mine ate them all.

And bacon.  It could’ve used bacon.   Because…. bacon.

2 – Grease a square baking dish with the butter and set the burgers in it.

3 – Mix the eggs and splash of milk in a bowl. Season with salt and pepper.

4 – Pour over the little nuggets of delight until covered. 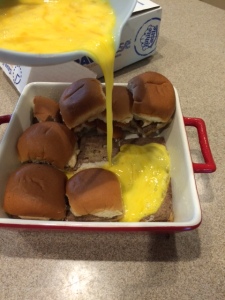 5 – Sprinkle the cheese over the whole deal. 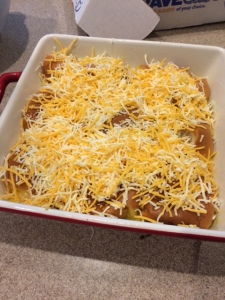 6 – Bake for about 30 minutes or so until eggs are set and cheese is melted.

7 – When serving, douse aggressively with Tabasco (optional, but not really) 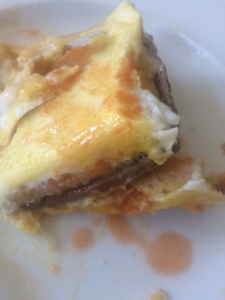 The verdict – it worked!   The queasiness was gone and I was energized and ready to go.   I may or may not have had enough gas later that day to power Rhode Island, but at least the stomach was feeling fine.

Hmmmm. I wonder if it’ll work with half-eaten burrito?

(Ha! Trick question.   I NEVER leave any burrito bits behind.)

This post originally appeared on Long Awkward Pause, the online humor mag that I occasionally contribute to.   Go go go on over there for some great laughs!!

I don't know everything about the world of food and wine, but I'm not going to let a small detail like that stop me from blogging about it.
View all posts by thefoodandwinehedonist →

12 comments on “Hair of the Dog That You Bit”

This entry was posted on August 11, 2015 by thefoodandwinehedonist in Cooking and tagged Ariana Grande, food, humor, recipe, restaurant, Sliders.

Error: Twitter did not respond. Please wait a few minutes and refresh this page.

© The Food and Wine Hedonist and Foodandwinehedonist.com, 2011-2015. Unauthorized use and/or duplication of this material without express and written permission from this blog’s author and/or owner is strictly prohibited. Excerpts and links may be used, provided that full and clear credit is given to The Food and Wine Hedonist and Foodandwinehedonist.com with appropriate and specific direction to the original content.
Loading Comments...
Comment
×
%d bloggers like this: